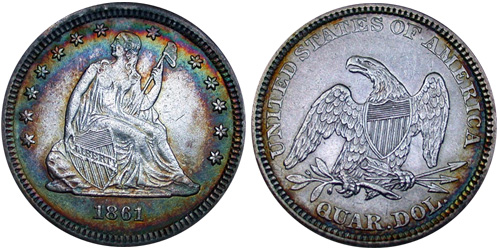 Production of the Seated Liberty Quarters occurred at the Philadelphia, New Orleans, San Francisco and Carson City Mints between 1838 and 1891. The largest number of issues came from the Philadelphia Mint. The New Orleans Mint would strike coins of the series from 1839 to 1860, and again in 1891. San Francisco issues were first struck in 1855 and periodically thereafter. The Carson City Mint struck the denomination from 1870 to 1878, with several scarce, low mintage issues included.

Philadelphia issues do not carry a mint mark. For the other issues, the mint mark is located on the reverse, below the eagle. The mint mark can be encountered in various sizes and placements depending on the issue, and often depending on the specific die that was used for striking.

The Liberty Seated Quarter had a composition of 90% silver and 10% copper, which would remain the same for the duration of the series. The weight of the coins would change on two occasions. The initial releases of the series carried a weight of 6.68 grams, but this was lowered to 6.22 grams in 1853. The denomination would see a slight increase in weight to 6.25 grams in 1873. All issues have a diameter of 24.3 mm and a reeded edge.

Because the large number of issues, giving a general indication striking quality and visual appearance is difficult. Generally speaking, the Philadelphia and San Francisco issues usually have better visual appearance than the Carson City and New Orleans issues, but this is not always the case. Some issues from the New Orleans Mint are known for being weakly struck, while others have the same striking quality as coins from other branch Mints. Another problem with many issues is the heavy circulation and subsequent mishandling by early collectors. This makes high-quality, original coins with good eye-appeal in the distinct minority, regardless of issue or Mint.